skip to main | skip to sidebar

Inspiration Can Come In Many Forms

WARNING: This blog contains photos of cakes Not Made by the Cake Girl! Where possible I have given reference to the decorator involved.
I was reading a post on Facebook the other day and it was from a fellow cake decorator asking "You Know you're a Cake Decorator when..." and I found myself agreeing with the response by so many followers...unfortunately when I tried to go back and find the story to post the link, I couldn't find it.
It's a huge world out there but with tools like Facebook and google at your fingertips, there is no limit.
There are many cake decorators out there...so many wonderful creations being made every minute...and they just keep on coming!
The amount of brilliant cakers' I am linked to on social networking is amazing. Watching what they do every week keeps me making cakes. We could never have dreamed of doing this years ago. The fact that they are welcoming and happy to share what they do each week is even more amazing when you think that in so many areas, hospitality closes it's doors to the 'competition' in case ideas are stolen. 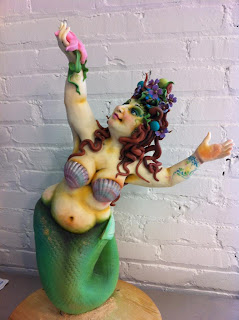 There are people like Karen Portaleo (https://www.facebook.com/karen.portaleo?fref=ts) - a genius by any other name! Seeing her cakes makes me smile in awe and hope that one day I can be as good as her. Craftsmanship that belongs with the classic artists like Rembrandt and Michelangelo yet households around the world don't recognise her name unless they are interested in cakes.
Her talents are extraordinary and could rival any sculpture out there when you realise that her art is edible!
The Mermaid on the left is just one of her many cake creations and as you can see, she is breathtaking! 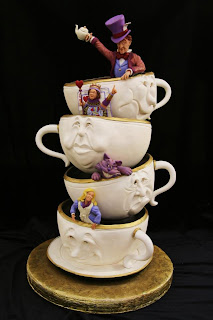 What about Mikes' Amazing Cakes (https://www.facebook.com/MikesAmazingCakes)...phew! There are no words to describe the cakes I have seen by him. Details of extraordinary ability like the Alice In Wonderland inspired cake on the right.
The icing is perfect and the figurines faultless! I could sit and look at every minuscule millimeter and don't think I would find anything out of place.

Debbie Brown cakes, Rosebud Cakes,  Davids Cakes, Michelle SugarArt, Cakes by Molly, Richards' Cakes and the list goes on and on and on....
All around the world, they gather in their studios and work their butts off (excuse the Aussie colloquialism) and show us the extraordinary world of cake decorating.
Traveling to the UK and Italy last May was unbelievable and made me realise I need to take time out every once in a while just to meet some of these fantastic inspirations in the flesh. With a group of established Brisbane/Toowoomba cakers like Cakes by Simone, Celebrity Cakes, Contemporary Cakes, Your Cake Kitchen and Merivale Cakes with students who were undertaking classes in cake decorating we set off to explore and meet some of our idols. This is our photo below on the last day with two of the leading ladies of the British Sugarcraft Guild. 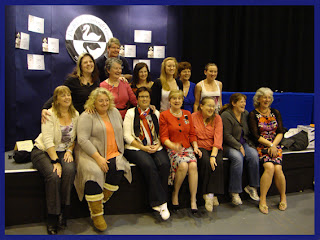 With two days to spend in London, four of us took in as many sights as we could. This included the newly opened Choccywoccydoodah (knew we couldn't make it to Brighton in time)! So I was ecstatic we could go there! Upstairs we settled in to a warm cup of hot chocolate and polished off the dessert plates between us.
four of us set off towards Birmingham and our major stop - the British Sugar Guilds Cake Convention via Wales. I must say that the late sunset really threw off my body clock! 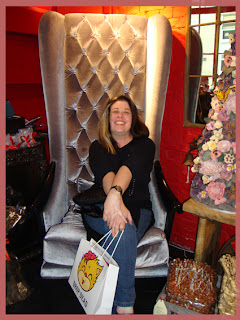 In amongst many little pit stops we got to try places like a small tea room near Covent Garden and see the sweets and goodies at Fortnum & Mason.
But it was time to leave for Telford so we gathered into our hired car.


First stop - Eric Lanlards' boutique in Battersea: "the cake boy"! ...and for those of you who think I used the female version of the name - Not at all! I came up with my business name when I saw a car with the licence plate: CKE 80Y in Sydney approximately 14 years ago. I was watching Lifestyle food channel and saw Eric Lanlards show for the first time about two years ago when I heard of his nickname!
But anyway, his quaint patisserie had the most extraordinary desserts! We all dug in and swapped and shared...that seemed to be the best way for all of us to try everything we could without having too much! Pity he wasn't in but apparently was in London filming a special that day :( 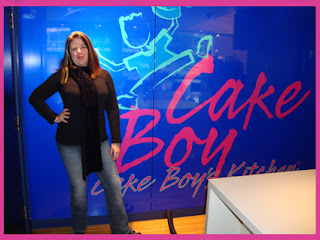 With quite a bit of sightseeing thrown in - including Bath and Cardiff (me - huge Doctor Who/Torchwood fan!) we arrived exhausted in Birmingham! 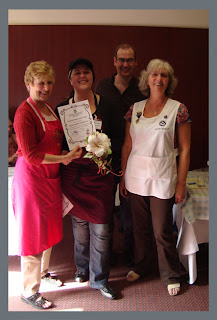 The next day saw us thrown into tutorials with a class group mixed from all around the world. We learnt flooded royal icing and brushwork embroidery with Elaine MacGregor. This was followed by sugar flowers with Alan Dunn. Phenomenal man! He just seems to speak to his flower creations and they grow before your very eyes! A small tweak here and another there, the finished sprays were beautiful.

Lots of chatting and exchanging of details, opening up our network of cake decorators. Even down to our famous USA/Canadian counterparts: Mary-Sue, Barb, Mary-Jo & Barry.
On the weekend, we all had the British Sugarcraft Guild Convention with loads of small demonstrations booked in by people like Debbie Brown, Karen Davies, Francis McNaughton & Dawn Butler
Then there were the people who I have only heard of like Tomby Peck, Marion Frost or had books on my shelves from Lindy Smith, Stephen Benison, Peggy Porschen & Mitch Turner. 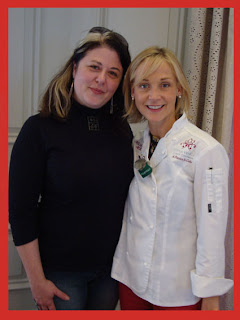 As you can well imagine, the days were full of learning, fun and continuous talk of who we had met and what we had learnt. 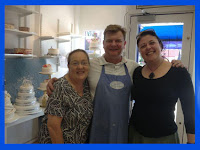 The last few days Lesley from Celebrity Cakes and myself left the group to drive up towards Scotland. We stopped off at Richards' Cakes and Slattery's in Manchester and then David's Cakes near Liverpool.
So much enthusiasm and willingness to show and share their knowledge and passion.
We're very fortunate to have had the opportunity to meet and liaise with people like this and it's what make my life all the more interesting.
I've said it before and I'll say it again. cake decorating can be a stimulating rewarding career if you put the time and effort in!

And who knows, this could take me elsewhere around the world sooner than I think!

Posted by Unknown at 8:27 PM No comments: Links to this post

Cake School Is IN!

With a few classes under my belt, I thought I should at least do a blog - as promised to my students - about the time spent teaching and some of the wonderful people I've met through this experience.
Lets start with a lovely girl - Suzy - who has a real passion for making cakes. Obsessed with cake shows on television and wanting to learn more, her Mum booked in a beginners' class for her
We completed her 'Fathers' Day" dedicated cake by the time her Mum arrived and she was so proud of her work! And who wouldn't be when she had never made an iced figurine prior to this.
During a six hour day, she managed to try her hand at piping, using cutters and making a figurine! Wow!

With this hand-bag class held at "Your Cake Kitchen" in Ormiston, the kids took over the experience. The students were allowed to make their bags in the colours they wanted using the bag I had created to inspire them. Each one reflects their own personality.
I like to encourage the students to open themselves to their creative side. If I tell them exactly the colours and style of what they need to make, it may not be what they wanted to make.
Along with the bag was the shoes...now of course, ladies love high heels but the boys in the class were obviuosly not interested.
So the boys had a little extra attention and made sneakers to match their gym bags. Very bright and funky. 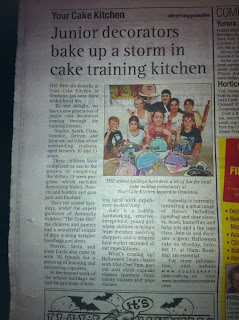 Over the Xmas period, Jenny held another class for me to teach. This time a Christmas theme was the order of the day and you can't get more festive then "The 12 days of Christmas". I had focused on the items in the poem and researched on google the cakes other poeple had made. Sketching out some ideas, I used these to create my inital cupcakes for the class and had them copy mine from start to finish. We started with the hardest ones that required setting time and moved on to easier ones.
At the end of the day, everyone has 12 cupcakes to take home and share with their loved ones.

A follow-on to this class, one of the ladies who had completed "The 12 days of Christmas" course - Trish - booked herself in for a basics personal class.
Wanting to be able to make home-made cupcakes was Trish's main objective for her family on special occasions so we covered the basics in fondant and buttercream. 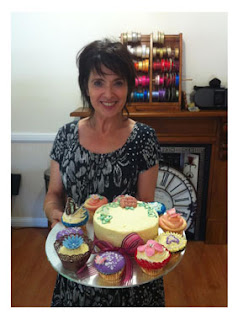 Signed on to work for a large Supermarket chain in their bakery section, Colleen needed an express class in piping. She was really good at following my instruction and by the end of the day Colleen was more than capable of taking on piping in a hospitality environment. Coming from overseas to study in Australia is not an easy prospect and many of our apprentices need to find jobs here whilst studying in their field too. Going to TAFE & learning to become a pastry chef is not an easy prospect and the classes don't cover most of cake decorating.
Linh works in her boyfriends' bread bakery and was hoping to expand his business to include her specialty cakes...Great thinking! Check out her fabulous cake! 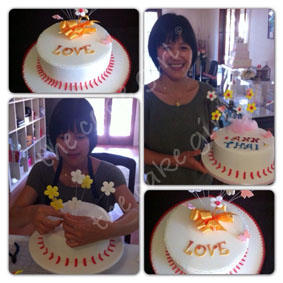 So if you're interested in a cake decorating class - just give me a call or shoot me an email and we can discuss your experience and what you would like to accomplish with your cake decorating! It's one on one so no hassles competing with other students.
Happy Baking.

Posted by Unknown at 10:01 PM 2 comments: Links to this post